This is a page dedicated to the memory and the musical works of Peg Russell – Mother and mentor to Sharny Russell, Steve Russell and Helen Russell, and beloved wife of Noel Russell. 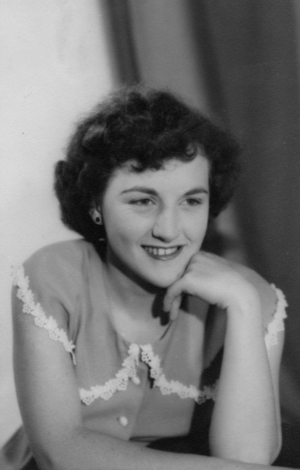 Peg was born Margaret Williams, in 1930, in Toowoomba, Queensland. The second youngest of the four daughters of Ted and Emma Williams, Peg grew up in the house attached to her parents corner grocery shop. The girls’ maternal grandmother lived with them, and was quite influential in their lives. The girls all took piano lessons from Daphne Muller – the same teacher that Sharny, Stephen and Helen learnt from years later. Peg was particularly gifted with an “ear” for music and attended Sydney Conservatorium as a piano student for one year before homesickness brought her back to Toowoomba. She worked in Mathers shoe store, then in the music shop, Palings. Eventually Noel Russell, who was a saxophonist and clarinettist, had heard of her pianistic gift, and asked her to join his band. A couple of years later they married. They continued to work on the weekends at local and country dances, with Noel changing his day job from fruiterer in his father’s business, to electrician, and then finally to journalist – first with the ABC, and soon after with the Toowoomba Chronicle.

Peg performed live classical piano recordings for the ABC, and also began developing as a fine jazz pianist. She listened to Nat King Cole and many other greats, sometimes transcribing every note they played. Peg’s beloved father died a few months before Sharny was born, and her mother soon retired at the Gold Coast. When Sharny and Stephen were 6 and 3 respectively, Noel and Peg became committed members of Redeemer Lutheran Church in Toowoomba. Peg eventually became involved in the music side of things and began conducting the church choir, arranging and directing small vocal groups, performing at the yearly amateur hours, and coaching many children in singing. She learnt and brilliantly performed whole Victor Borge skits, made detailed dresses for her daughters’ dolls, lovingly gardened roses, made wedding head dresses from beads, managed the school’s costume cupboard, and wrote songs for special events. She was a woman of many talents and, some may say, obsessions. For Peg, there was a place for everything, and everything in its place”. As Noel would say “It’s Peg’s way, or no way!”

Peg played in the orchestra pit for many a local Choral and Philharmonic Societies’ production – as did Noel. She also wrote many shows for the Junior Choral Society – selecting a theme, then collating and arranging songs for choir, small groups, solos and duets. The shows were greatly successful. Peg also trained and arranged for a select group of mostly teenagers, comprising her own children and 7 others. This group performed at mayoral command performances, special events, and even did some television work. It was for this group that Sharny began arranging, and later writing original material. Peg was to play piano for many visiting artists, such as Gordon Boyd, Patrick O’Hagan, Mark Holden and Kamahl. She also played for Don Burrows and George Golla, and Don talked about “this lady from Toowoomba who plays like Bill Evans!” (the legendary American pianist who worked with Miles Davis, and of whom she’d never heard!).

Peg was a fine teacher and, becoming impressed with their method of teaching young children music, became the head teacher of the Yamaha Music Foundation school in Toowoomba in 1976. She and her friend Dell Maw bought the rights to operate the school in 1981, and in 1983 Peg bought her friend out and ran the school herself until her retirement in 1995. Peg also eventually became an expert in electronic organ and trained 8 state champions and many national finalists in competitions – more than any other Yamaha school in Australia could boast.

Peg’s song-writing came a little later – although she had written a beautiful ballad when Noel went away to Melbourne before they were married. This song, “Lonely Night”, is on Sharny’s first album with George Golla, VELVET JAZZ. Peg, being a great fan and friend of George, had the pleasure of hearing this recording, which was released not long before her death. Noel has a hand-written letter from Don Burrows following Peg’s passing. He thought the world of her.

Arrangements by Peg Russell were publically and personally acknowledged by overseas adjudicators and aficionados as “world class” and “needing to be published”. She intended to follow the path to this end, but it wasn’t as easy as she might have liked and she retreated somewhat in discouragement.

Peg suffered with a heart condition from 1983 and eventually gave in to it, passing away in 1998. Her doctors, who had recommended a heart transplant in 1989 – she declined – were amazed that she lived her last 9 years with “a working heart the size of a walnut”. She continued to write more songs, springing from her sweetly expanding relationship with God, and conduct, arrange, and coach young singers until the very day she passed peacefully in her chair, with her beloved cat on her lap. This was the only occasion of many when her devoted husband Noel could not resuscitate her until medical help arrived.

SPRING SALE
GET 30% OFF FOR SHARNY RUSSELL’S PIANO METHOD FOR JAZZ SINGERS
USE THIS CODE: piano30% Dismiss